McCarthy is located in the very center of Wrangell St. Elias National Park. Our “Sister City” of Kennicott is just 4.5 miles away. You can not possibly visit the area without spending time in both Kennicott & McCarthy. The towns are rich in history and surrounded by the largest protected wilderness on earth. 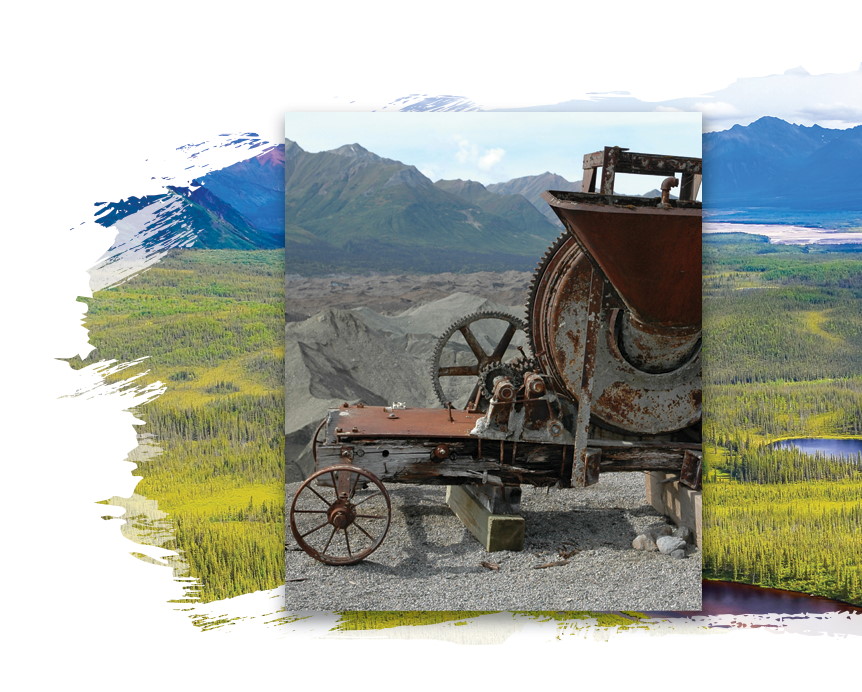 4 major mountain ranges share this park, and 3 of them converge on the tiny town of McCarthy.

Once the railroad arrived, McCarthy became a primary freight and passenger drop.

The Mill building, at 14 levels, is still the tallest wooden structure in America.

The copper in the area of Kennecott was among the richest deposits ever found.

At one time in history, McCarthy was the largest city in Alaska. 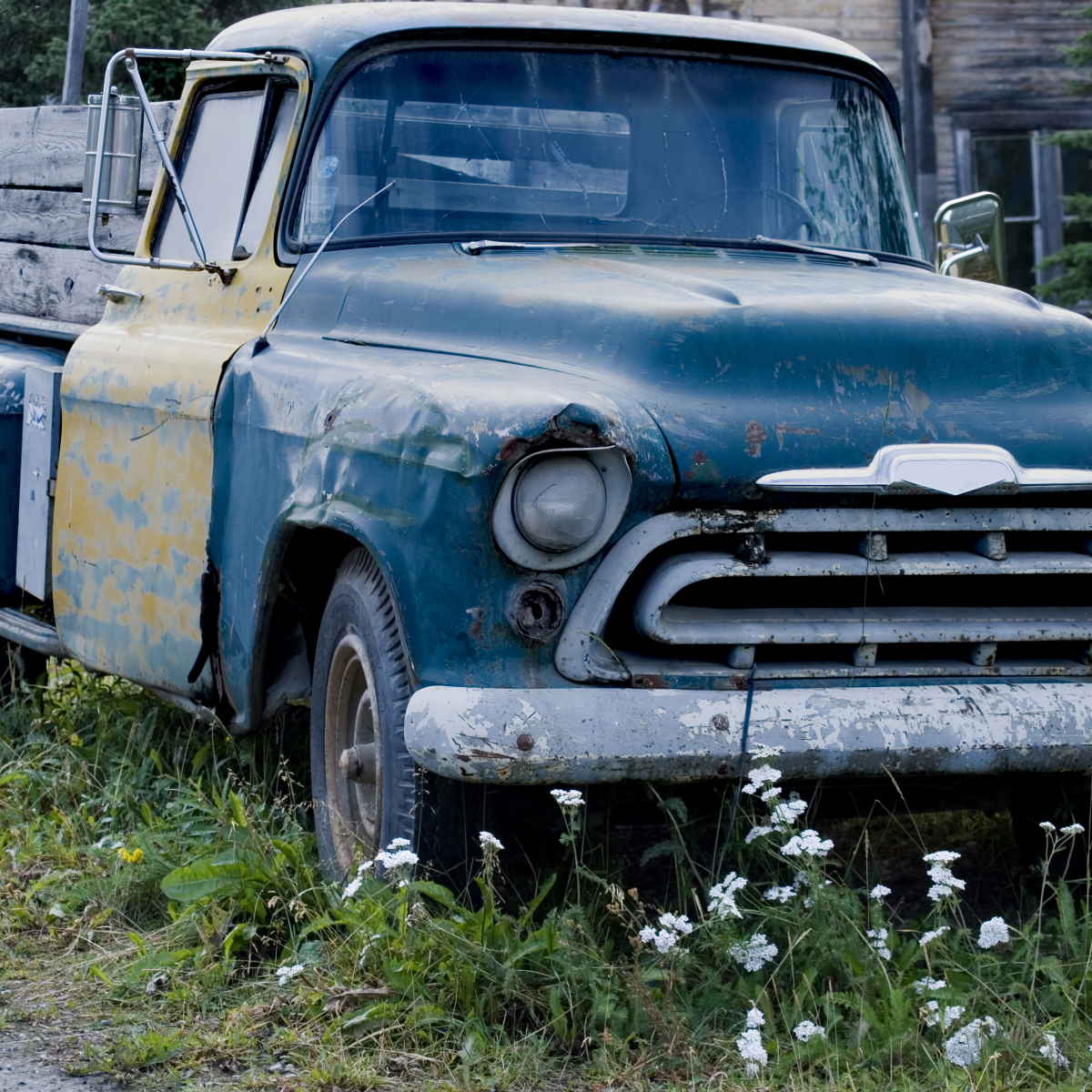 mccarthy was a party town

McCarthy is built on a patented homestead. No doubt the chosen location may have anticipated where the railroad would have to cross the Kennicott Glacier face. It is unclear just how much real homesteading went on (though John Barrett could grow some good crops) for soon, the railroad came to town and McCarthy became a primary freight and passenger drop.

Freight not only for Kennecott but also the burgeoning mining camp of Sushanna and Dan Creek The original settlement of Blackburn was more a tent city of hopeful workers than a town and not an ideal location for a rail stop. Though Blackburn organized itself before McCarthy and had a council, mayor and a school, it was not ideally located for the railroads' needs. Very little of it still remains. However, McCarthy eventually did become the mining support town and all because of John Barrett's political and social acumen.

McCarthy's location as a central freight and passenger stop ensured its growth over the next decade or so as gold strikes and other mining enterprises arose in the Sushanna and Dan Creek area. The Merchants of McCarthy were known as shrewd business men and often got the better portion of the miners cash. About anything a person desired was available in McCarthy providing one was willing to pay. From female companionship to caviar anything could be had for a price.

Because everyone had to pass through McCarthy it was a great location for a sin city. And the good time girls arrived to set up shop. This continued right up to the final days before the railroad pulled out, though on a lesser scale. Many of the women of the line were highly respected in the community and known for their charity work and good deeds. It’s interesting to note that no church was ever established in the early days within the precincts of the town and though many citizens were tee totalers, the bootlegging and still operations remained rampant all through the prohibition years.

It is also a misnomer on many people's part to promote the idea that McCarthy became a ghost town after the railroad pulled out. This simply is not true. Many people stayed on, this was their home after all. McCarthy has a continuous history of rugged individuals who enjoyed life in these mountains. Many mining operations also tried their hands in the area after 1938. It was Kennecott Mining Corporation, by then a multinational conglomerate who left the country, not the people.

Kennecott Mine and the railroad

The engineering effort at the turn of the century to build the mines and railroad was truly awesome. The structures that still stand at the mill site and mines represent a time of wide open exploration and exploitation in Alaska’s rough and wild early days. The Mill building, at 14 levels, is still the tallest wooden structure in America. 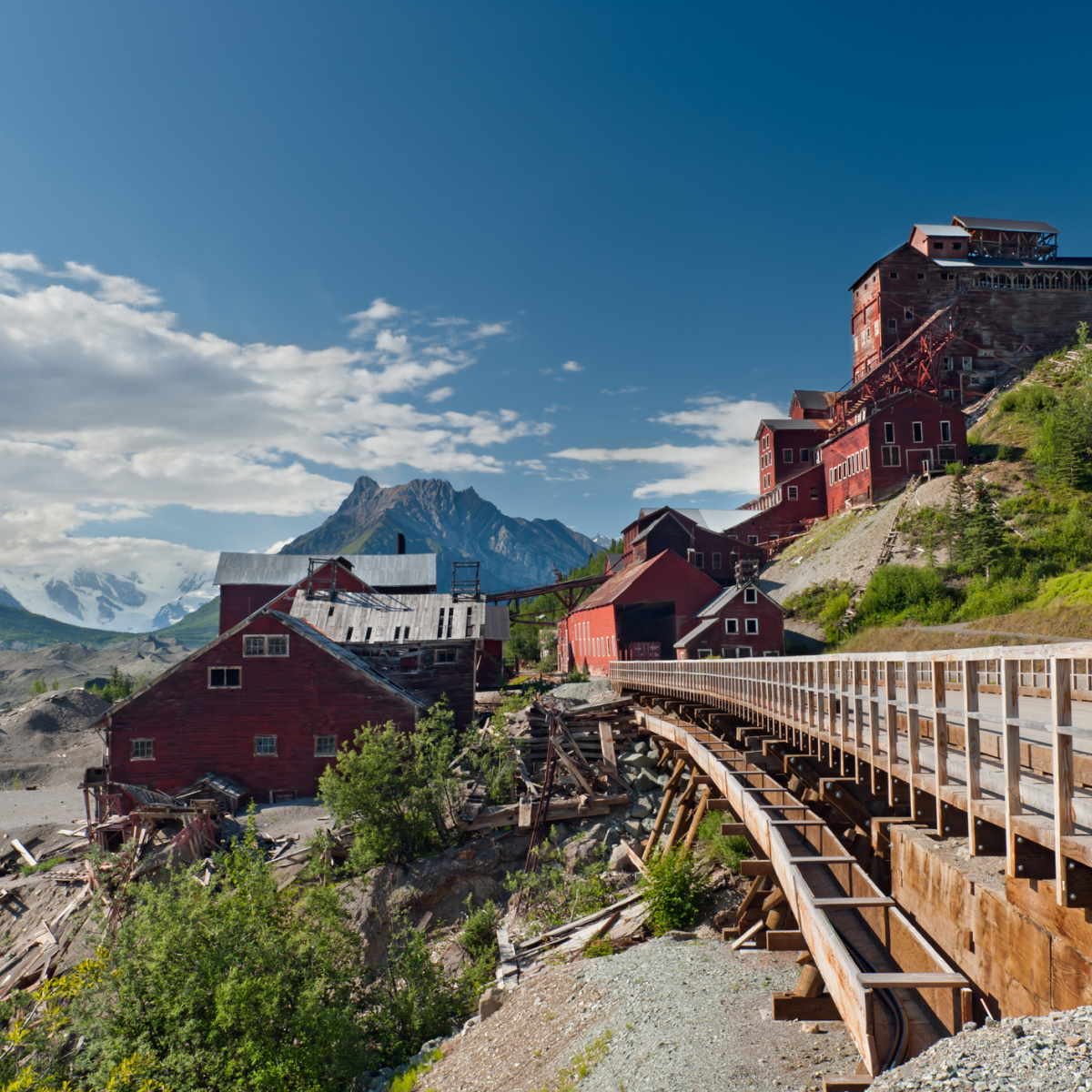 Kennecott's high-grade copper ore, was known, revered and used by the Ahtna native tribes. It was directly because of the knowledge of these peoples that the white man located these copper deposits. The Athabascan Indian culture is widespread through the interior lands of Alaska. They are the true caretakers of the land. Until the United States purchased Alaska, the Ahtnas were successful in keeping the Russians out of the Copper River valley and thus their culture intact, at least until the advent of the Gold Rush.

The copper in the area of Kennecott was among the richest deposits ever found and still unique in the world. The mountains just to the northeast of the present mine site of Kennecott display a well-defined contact line apparent at about the 6,000 foot elevation. This line is where the Chitistone Limestone (a light-colored rock) and Nikolai Greenstone (the dark colored rock beneath it) meet. The limestone-greenstone contact was reported by early geologists surveying the area in 1899 as a formation along which copper ore bodies might be formed.

In the summer of 1900, the prospectors Clarence Warner and "Tarantula Jack" Smith were prospecting the east side of the Kennicott Glacier armed with the stories of the Ahtnas and the geologists. They could not miss the magnificent green cliffs of oxidized copper high on the mountainside. They staked the discovery as the "Bonanza".

Stephen Birch, fronting for a group of venture capitalists purchased the claim. Birch was backed by some of the "industrial baron" families of the time, the Morgans and Guggenheims. First called the Alaska Syndicate, it was later renamed the Kennecott Copper Corporation in 1915.

Along with the building of the mine and mill works, the corporation constructed the 196 miles of railroad from Kennecott to Cordova, also a steamship line that shipped the ore to be processed in Tacoma, Washington. Shipments began in 1911. The final shipment was in 1938, Over $300 million worth of copper was shipped on the Copper River & Northwestern Railroad to the shipping port of Cordova. It is said the whole construction costs were covered by the gold and silver recovered in the same deposits, thus making the sales from copper pure profit.

Kennecott Copper Corporation employed over 600 people, 300 at the mill site, where crushing, sorting and shipment occurred. Another 300 lived in the mines and bunkhouses up the mountain reached by the extensive tram system. There are over 80 miles of tunnels in the mountain. Kennecott was a company town, complete with a power plant, homes for the managers, a modern hospital, a company general store, gymnasium, schoolhouse, recreation facilities, bunk houses and of course, its own Kennecott Dairy.

Some of the buildings in Kennecott are still owned privately. Several of our McCarthy vendors are located here. With the acquisition by the National Park Service in 1997 many buildings have been restored using locals for the construction crews. The Park Service continues to spend millions to preserve this endangered national monument. There are local guiding companies that currently conduct tours through the buildings. 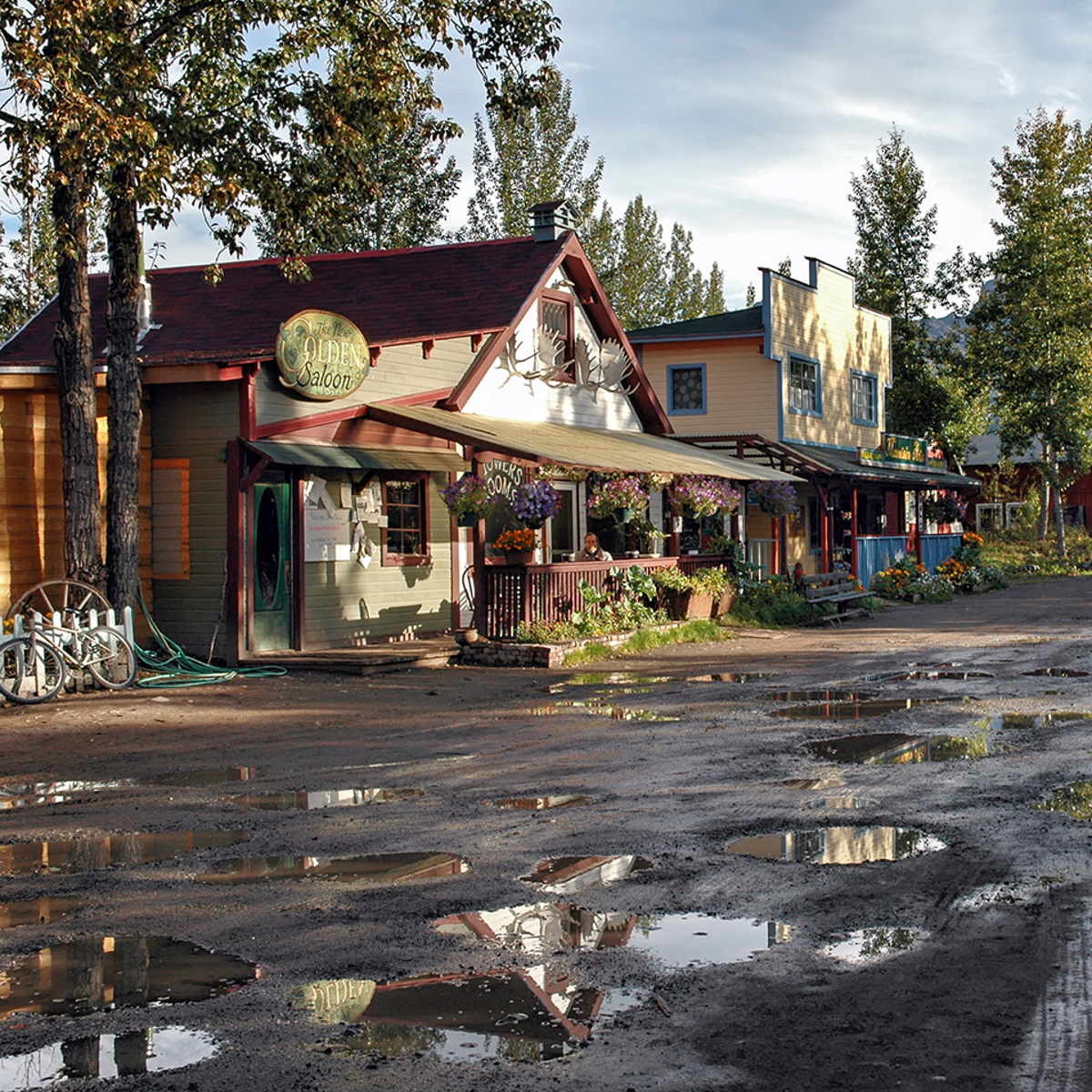 McCarthy and Kennicott are two of the most well preserved ghost towns in America. Kennicott was the quintessential “Company Town” & McCarthy was a fully realized “Sin City”. These towns were inseparably tied together back in the beginning, and they are still inseparable today.

Kennicott is where you will want to spend the day, exploring the town and hiking on the glacier.

McCarthy is where you will want to spend the nights, celebrating at the Golden Saloon, enjoying a gourmet dining experience at the McCarthy Lodge, or just sitting on the porch of the Ma Johnson’s Hotel watching the town go by...

At one time in history, McCarthy was the largest city in Alaska. (Of course, there was no Anchorage back then.) Indeed, few towns in Alaska are 100 years old and McCarthy celebrated its Centennial in 2006.

Many famous characters ended up in McCarthy, including Kate Kennedy, the town’s most famous madam. There was every luxury you could imagine available in this remote outpost, including a dress maker's shop, several hardware stores, many “Fountains & pool halls” (perfect place to get a drink during prohibition).

Today, McCarthy is still a “mercantile town”. McCarthy Ventures LLC has been restoring much of McCarthy’s downtown since 2001. We are dedicated to the preservation of this area. Our staff, most of whom live here year around, are keenly interested in sharing their town with you. We love the history and we enjoy sharing the stories and lifestyle we live with our guests.

So this place gets 5 out of 5 because it has that extra something. Really unique, have never seen anything like it.